Polskie Górnictwo Naftowe i Gazownictwo Spółka Akcyjna (PGNiG) has its registered office at ul. Marcina Kasprzaka 25, Warsaw, Poland. PGNIG is the Parent of the PGNiG Group (the Group). Its shares have been listed on the Warsaw Stock Exchange (WSE) since September 2005. The State Treasury is the majority shareholder of PGNiG. 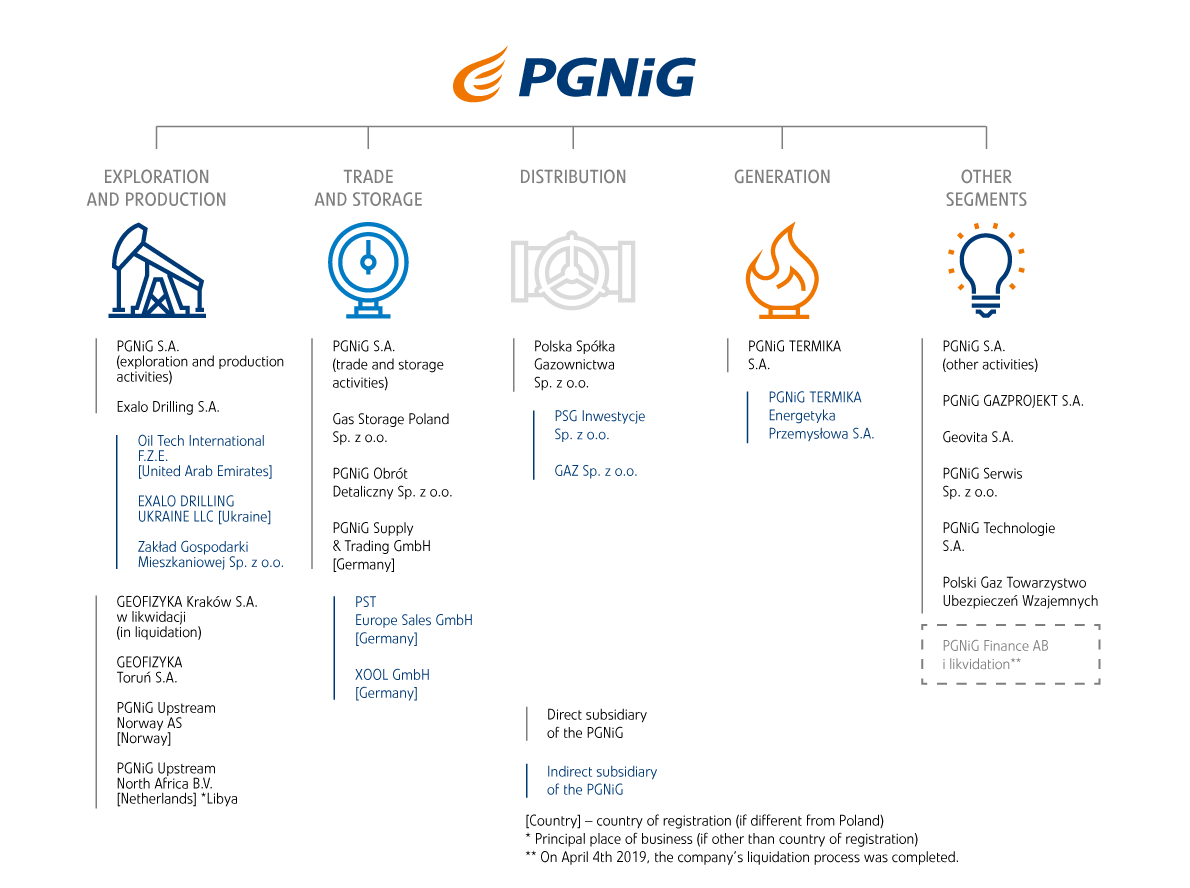 PGNiG is the leader of the natural gas market in Poland and one of the largest companies listed on the WSE. PGNiG’s business comprises exploration for and production of natural gas and crude oil. Through the Group’s key companies, PGNiG is also active in the area of import, storage, sale and distribution of gas and liquid fuels, as well as heat and electricity generation and distribution.

The PGNiG Group plays a key role on the Polish gas market and, as the market leader, takes responsibility for maintaining Poland’s energy security. Therefore, it takes measures necessary to satisfy the steadily growing demand for gas fuel. The PGNiG Group ensures supply diversification by developing domestic deposits and sourcing gas from abroad, as the largest importer and supplier of natural gas in Poland. The fuel is transported to Poland via an extensive transmission network and the President Lech Kaczyński LNG Terminal in Świnoujście. Gas is delivered to end users mainly through the distribution networks. The national gas system is complete with gas fuel storage facilities, used to cover seasonal and daily shortages of gas fuel.

PGNiG has foreign branches and representative offices in Pakistan, the United Arab Emirates, Russia, Belgium and Belarus, and holds equity interests in some 30 companies, including providers of specialist geophysical, drilling and well services, highly valued on international markets.

PGNiG is the sole owner of PGNiG Upstream Norway (PUN), engaged in upstream activities on the Norwegian Continental Shelf and the Norwegian Sea, and PGNiG Supply & Trading (PST), which sells gas to wholesale customers abroad. In addition, PST trades on the global LNG market through its London branch.

As at December 31st 2019, the PGNiG Group comprised 35 business entities, including:

List of the PGNiG Group subsidiaries as at December 31st 2019