PST’s main competitors are commodity trading companies (Vitol, Trafigura, Trailstone and others), which generally apply an opportunistic approach to entering the energy trading market. Their presence is seen in particular on the LNG market, where oversupply is expected in the coming years (2020–2022) because of new liquefaction capacities in the US.

On the Polish natural gas retail market, the company competes with the largest electricity suppliers that expand their operations to include sale of natural gas. Major competitors on the gas market in 2019, and the most active ones, were: SIME Polska Sp. z o.o., Fortum Marketing and Sales Polska S.A., TAURON Polska Energia S.A., Enea S.A., Axpo Polska Sp. z o.o. and Hermes Energy Group S.A. (declared bankrupt as at 01.12.2019).

PST ES’s main competitors on the retail market are large companies (E.ON, RWE, EnBW, Vattenfall) and municipal utilities owned by local authorities – all fighting to maintain or increase their market share in the end customer sector.

There are 52 competing DSOs (Distribution System Operators) on the Polish gas distribution market, including:

Operating areas of competitors in Poland 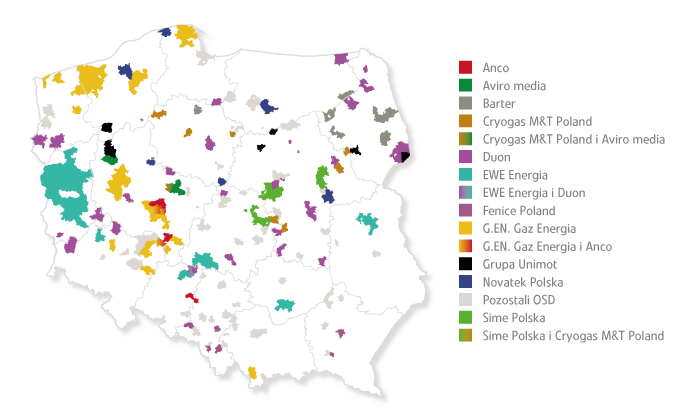 Number of municipalities where competitors operate

Among companies that have the largest influence on the Polish distribution market are entities with the majority of entry points into their distribution systems, including LNG regasification stations, being independent from PSG, which operate in approximately 40% of the municipalities where PSG’s has direct competitors. These include: DUON Dystrybucja Sp. z o.o.; GAZ ENERGIA Sp. z o.o., Novatek Polska. Other competitors are active on local markets or expand at smaller rates.

In the area of heat generation, PGNiG TERMIKA operates on markets limited by the boundaries of two separate municipal heating networks: in the capital city of Warsaw and in Pruszków, Piastów and Michałowice. A share in the heat production in Warsaw and a share in Pruszków makes PGNiG TERMIKA a natural monopolist in these areas. With respect to heat generation, its only true competitor is Zakład Utylizacji Stałych Odpadów Komunalnych of Warsaw (ZUSOK). A significant area of competition is sales of heat to end users, where the company operates under the TPA (third-party access) rules.

PGNiG TERMIKA sells electricity almost exclusively on the wholesale market (with an only marginal share of sales to end customers). In 2019, as in previous years, the main players on the wholesale market were three groups of companies: PGE, TAURON, and ENEA, which account for some 67% of total installed capacity and whose electricity outputs represent approximately 70% of the total domestic production (the percentage figures are given for 2018 because the annual report on the operation of the Polish National Power System is not available). The PGE Group holds the largest share in electricity generation (2018: 42.9%). Given their shares in the wholesale market, the above entities certainly have a major impact on the development of energy prices in futures contracts.